Did He Do It? Episode 5 “Poetic Justice”

Did He Do It? is a dynamic new true crime drama documentary series on Discovery ID that puts the accused center stage. At the top of each episode we introduce one murder victim – and one prime suspect. 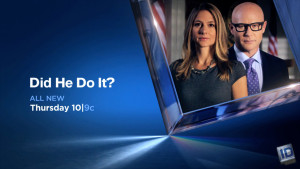 Did He Do It? Episode 5 “Poetic Justice” features the case of wealthy businessman Melvin Ignatow. Ignatow stands trial for the brutal murder of his fiancée, 36-year-old Brenda Schaefer. Six months following his sensational acquittal, new evidence found under the floorboards reveals a startling account of what really happened.

Presented by dueling lawyers – for the Defense, Darren Kavinoky, named one of California’s top 100 trial lawyers; for the Prosecution, Brooklyn DA Anna Sigga Nicolazzi, who has never lost a homicide case – we tell the story of the twisting murder investigation and trial, asking viewers, just like with a jury, to decide Did He Do It?

“With two of the best lawyers in the world presenting their respective sides of the case, viewers will be able to view the evidence from the unique perspectives of both the prosecution and the defense,” said Kevin Bennett, general manager of Investigation Discovery. “ID is thrilled to share Kavinoky and Nicolazzi’s undeniable knowledge and expertise as they debate the ultimate question of innocence.”

DID HE DO IT? follows Nicolazzi and Kavinoky as they present their respective prosecution and defense arguments of a case. Transporting viewers to the forefront of famous homicide trials, each episode features one highly-debated story interlaced with expert commentary from Nicolazzi and Kavinoky, as well as friends, family, law enforcement and victims of the crimes.

Watch Did He Do It? On Discovery ID and find out if Melvin Ignatow did it.

Inside the Case: James Holmes

By Darren Kavinoky in Current Events & Legal News on April 30, 2015

By Darren Kavinoky in Current Events & Legal News on April 30, 2015