The murder case against Robert Durst is playing out right now in the court of public opinion. This is in large part due to the HBO Documentary, The Jinx. The filmmakers showcased two key pieces of evidence against Durst and while both make for exciting and engaging television, each faces a much different challenge in the courtroom. 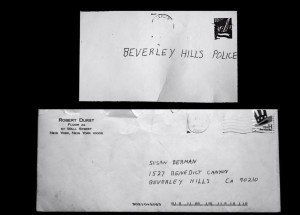 Robert Durst admitted he sent Susan Berman a letter several years before her death. It is not the contents of this letter that makes it significant to investigators but the handwriting on the envelope. The distinctive block-style print appears to many, me included, to be strikingly similar to an anonymous letter sent to the Beverly Hills Police Department. The similarities include the misspelling of the word Beverly on each envelope. The second letter was mailed to Beverly Hills Police the day before Berman’s body was discovered. The logical conclusion is the killer sent the letter tipping police to Berman’s body and the similarities in how both letters were styled leads to the conclusion Durst sent them both.

A Los Angeles Times article quotes a search warrant affidavit for Durst’s Houston apartment. The affidavit provides details of the LAPD investigation including efforts by detectives to determine who wrote the letter to the Beverly Hills Police Department.

At the time, (February 2001) the warrant affidavit shows, detectives had focused on a different potential suspect, Berman’s manager Nyle Brenner. Comparing writing samples from Brenner to the letter, LAPD handwriting analyst William Leaver concluded in a report that it was “highly probable” Brenner was the letter’s author, according to the affidavit.

Faced with conflicting reports that fingered two people as the likely culprit, Leaver (handwriting expert) quickly followed his analysis of Durst’s writing with a conclusion that it was now “highly probable” that Brenner had not written the note to police. A specialist in the state’s Department of Justice reviewed the work and agreed there was no reason to suspect Brenner, who could not be reached for comment Wednesday.

This left Robert Durst as the probable writer according to investigators. It also leaves a gaping hole in which Dick DeGuerin and the Durst legal team can drive a convoy of reasonable doubt into a LA County courtroom and park it at the feet of a jury. Just like with OJ Simpson, questions about process and procedure can become the focus rather than the actions of the defendant.

In my opinion, the conventional wisdom concerning this evidence dominating the court of public opinion will not be able to withstand legitimate questions from the defense. In court, attorneys either argue about one of two things, either what the evidence is or what the evidence means. A possible defense will be to question all the handwriting analysis and call it junk science that can be manipulated to support the prosecutions theory. Then the only conclusion this evidence might lead to is reasonable doubt. To me this seems to be an easier path to success than the one DeGuerin and his team overcame in Galveston, Texas with the dismemberment of Morris Black.

Ultimately, this case, like almost every criminal case I can think of, will come down to jury selection. You can have the best defense in the world, but if you don’t have an audience receptive to hearing it, you’re done. The reverse is also true: if you have an audience that is aligned with your world view, the inevitable “battle of the experts” will result in reasonable doubt.

The second damming piece of evidence against Robert Durst is the so-called confession recorded at the conclusion of the second interview between Durst and filmmaker Andrew Jurecki. Durst whispers to himself in an unguarded moment,

“Killed them all, of course.”

DeGuerin and his team have several options with this recording. They will likely try to keep this recording out of evidence. They can raise questions about the chain of custody, the possibility of editing or manipulation or even an expectation of privacy that was violated by recording Durst when he was in the bathroom.

I believe that ultimately that recording will likely be played for the jury, and the defense will instead parse his words. What was he really saying? It is not a stretch to conclude that a man muttering to himself in that context is far less powerful than a direct answer to a specific question. For all the swirling controversy about that statement, I believe other evidence could be considered more powerful.

What is beyond dispute is that the Durst case promises to be a hard-fought legal battle, played out against the backdrop of Los Angeles, in a courtroom where 20 years ago, the world was convinced that a murder conviction was forthcoming… and an acquittal happened. At the end of the day, pre-game predictions mean little, and the “game” must be one on the field. I’m looking forward to seeing this one played.

By Darren Kavinoky in Current Events & Legal News on March 19, 2015

By Darren Kavinoky in Current Events & Legal News on March 19, 2015