The July 2016 Darren Kavinoky Book Club selection is a true story in history that delves into World War ll and a Japanese American family split between two sides. 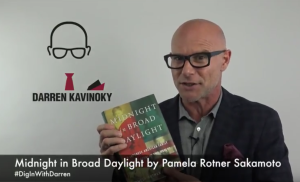 Hey DK Book Club Members! Happy July! I hope you are having a great summer!

I know many of you are heading off on vacation, so we chose a nice long book for you to throw in your beach bag. I’m excited to announce this month, for July, the Darren Kavinoky Book Club will be reading Pamela Rotner Sakamoto’s “Midnight in Broad Daylight: A Japanese American Family Caught between Two Worlds.”

As always, let me know your thoughts with hashtag #DigInWithDarren.

As the book club continues to grow, we will be setting up some Periscope sessions and live tweeting about the book of the month! You can find more information about “Midnight in Broad Daylight” on my Website at DarrenKavinoky.com.

See you between the pages!

3 Thumbs Up for The Girl on the Train