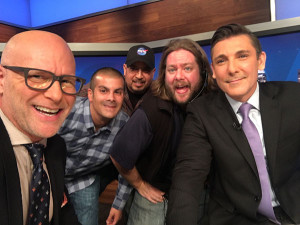 Darren Kavinoky on CNN International with John Vause and crew discussing Nickelback, DUIs, and Travel to Canada after a DUI

The Canadian police announce this week that they will play Nickelback for those arrested for DUI in the police car ride to the station.

Kensington Police Service in Canada announced the new DUI punishment in a Facebook post over the weekend…”When we catch you, and we will catch you, on top of a hefty fine, a criminal charge and a years driving suspension we will also provide you with a bonus gift of playing the offices copy of Nickelback in the cruiser on the way to jail.” [1]

John Vause of CNN says, “In the sleepy town of Kensington they’re warning of a cruel and unusual punishment for drunk drivers who find themselves in the back of a patrol car…miranda rights, handcuffs and the blaring sound of Canada’s much-maligned rock band Nickelback. Criminal defense attorney Darren Kavinoky joins me now. Mr. No Cuffs specializes in DUI law.”

“I think it’s so clever and I’ll bet you that tomorrow Chief Marketing Officers in corporations all around the world are going to be called into their bosses office to say, ‘You know what do one of those viral things for me.’ It’s an authentic real way to get people engaged in an important conversation. It’s a big problem,” observes criminal defense lawyer Darren Kavinoky.


Can you travel to Canada if you have a DUI?

Vause and Kavinoky discuss in depth the severity of the problem that Canada faces with fatal accidents that involve drugs or alcohol. They also discuss how seriously Canadians are about cracking down on the problem including keeping out visitors convicted of DUIs from other countries. See what criminal defense attorney Darren Kavinoky has to say in answer to this question about travel to Canada after DUI here.

Criminal Defense attorney Darren Kavinoky is the founding attorney of 1.800.NoCuffs. If you need a DUI attorney in Los Angeles, you can see the team at The Kavinoky Law Firm here.

By Darren Kavinoky in Current Events & Legal News on December 1, 2016

By Darren Kavinoky in Current Events & Legal News on December 1, 2016