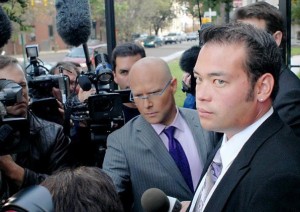 Shocking accusation by Jon Gosselin that he has not seen one of his children for almost a year and half brings into the spotlight a custody case in the family previously starring in the TLC show “Jon & Kate Plus 8.” Darren Kavinoky on The Insider – CBS @ 7pm PST discusses the Jon Gosselin and Kate Gosselin custody case on November 30, 2016.

In Darren Kavinoky’s The Insider appearance on November 30, 2016, the attorney and founder of 1.800.NoCuffs weighs in with his legal opinion on the custody case that Jon Gosselin is bringing against his former spouse Kate Gosselin. Watch below:

Jon Gosselin, according to this report by In Touch Weekly, [1] currently only has visitation of his set of twins and sextuplets. Jon Gosselin is asking the court to award him joint custody. He is also asking for information and the whereabouts of one of his children the report claims that the father has not seen in over 18 months.

Attorney Darren Kavinoky, founder of 1.800.NoCuffs, weighs in with his legal opinion on the custody case. "So reportedly, the judge has ordered a trial as soon as possible, which promises to be bitter if recent interviews granted by the estranged couple are any indication."

According to CBS The Insider, and a report of Kate Gosselin speaking to Nightline, the child Jon Gosselin claims he has not seen is "in a private care facility as mandated by his doctors."

Kavinoky adds, "It's standard operating procedure that a judge will order psychological evaluations of all eight children, and both parents, before heading to trial..no matter how contentious the hearing is, the focus is entirely on what is in the best interest of the children period."

By Darren Kavinoky in Current Events & Legal News on November 30, 2016