“Dig In with Darren” for Cheesecake Day July 30th

DIG IN WITH DARREN FOR CHEESECAKE DAY

July 30th is National Cheesecake Day. Darren Kavinoky digs in of course as who would miss #CheesecakeDay?! Watch the video above as Darren delves into a piece of cheesecake from the Cheesecake Factory–where he got his start…and be sure to check out the giveaway below! 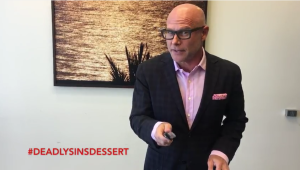 Cheesecake day is Saturday July 30th so we thought “why not really load up on the cheese today?!” After all of that lasagna, I saved a little room for a piece of this apple cheesecake from the Cheesecake Factory.

It looks like it belongs on an episode of Deadly Sins, since this is definitely gluttony. …Or maybe it’s the knife I’m holding…

By the way, since Lasagna and Cheesecake Day fall Friday and Saturday, you really should watch Deadly Sins on Thursday night on Investigation Discovery! 10 p.m. Eastern, 9 Central.

And of course, if you’re a two-screen person, I’ll be live on Twitter during that episode, so join me there!

(After all this lasagna and cheesecake, let’s make it jogging/crossfit/hot yoga days for the rest of the weekend, shall we?)

Post a pic of you with either your cheesecake and hashtag it #DeadlySins and #gluttony. Be sure to tag me on either Facebeook /DarrenKavinokyFanPage or on Twitter @DarrenKavinoky and I will be sending out my favorite #DeadlySins dessert photo either an autographed Discovery ID sweatshirt or hat!

RULES: Winners will be chosen at random. There is no entry fee to win. A photo that is hashtagged #DeadlySins and #Gluttony and tagged to Darren Kavinoky on Twitter or Facebook will be chosen based on random selection. The recipient of the giveaway product, either a sweatshirt or hat, must provide a mailing address in the United States. There may be more than one photo chosen as the winner. Darren Kavinoky reserves the right to choose more than one winning photo. If winning photo can’t provide a mailing address in the United States, then another photo will be chosen. By tagging photo as said above and entering the giveaway promotion, you give us the right to publish your photo and share it on all social media platforms. Entry and photo submission deadline is Monday, August 1st 2016.

Tonight on Investigation Discovery’s Deadly Sins it’s “Michigan Wolverines” when sloth, lust and wrath transform a homely housewife into a walking nightmare, terrorizing everyone around her and killing those in her care. And later, a lying, lazy house husband turns the perfect suburban life into a living hell. 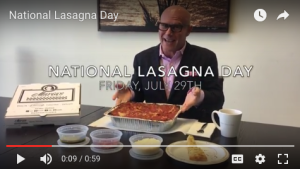 Watch Dig In With Darren for Lasagna Day here.

Be sure to also check out the Sinful Summer Playlist

"Dig In With Darren" for Lasagna Day July 29th