World Day against Trafficking in Persons is July 30th. What is trafficking in persons? It is the face of modern day slavery that includes sex trafficking, child sex trafficking, forced labor, bonded labor or debt bondage, domestic servitude, forced child labor, and unlawful recruitment and use of child soldiers.

Trafficking is a global crime that affects vulnerable women, men and children through exploitation. No country is immune to this epidemic.

According to The U.S. Department of State 2016 Trafficking in Persons Report, in the U.S., “Particularly vulnerable populations in the United States include: children in the child welfare and juvenile justice systems; runaway and homeless youth; American Indians and Alaska Natives; migrant laborers, including participants in visa programs for temporary workers; foreign national domestic workers in diplomatic households; persons with limited English proficiency; persons with disabilities; and LGBTI individuals.” In some cases, the report finds, “traffickers [are] targeting victims with disabilities…by using drugs or withholding medication to coerce victims into prostitution.” [1] 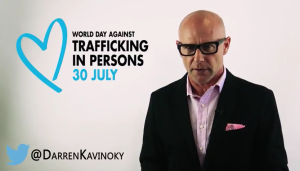 You can join the Blue Heart campaign against human trafficking and help make a difference. Visit unodc.org/blueheart and see all of the ways that you can help and have a heart for victims of human trafficking.

"Dig In with Darren" for Cheesecake Day July 30th

Author cautions jumping to conclusions in the midst of hysteria