Get home before dark on Labor Day weekend by Darren Kavinoky

Labor Day weekend is a great time to enjoy freedom from work, but please be responsible. Look out for yourself and others on the road.

Labor Day Weekend: Who Are We Celebrating?

via U.S. Census Bureau:
“158.5 million – The number of people age 16 and over in the nation’s labor force as of May 2016.
Source: U.S. Bureau of Labor Statistics, Table A
www.bls.gov/news.release/pdf/empsit.pdf

The first observance of Labor Day was likely on Sept. 5, 1882, when some 10,000 workers assembled in New York City for a parade. The parade inspired similar events across the country, and by 1894 more than half the states were observing a “workingmen’s holiday” on one day or another. Later that year, with Congress passing legislation and President Grover Cleveland signing the bill on June 29, the first Monday in September was designated “Labor Day.” This national holiday is a creation of the labor movement in the late 19th century and pays tribute to the social and economic achievements of American workers.”

The most popular weekend of the year to travel is upon us. Labor Day traditionally marks the end of the summer and a new season of learning. What have we learned about Labor Day’s past?

Number one: Stay off the road at night!

All of those drivers thought that they would make it to their destinations but they didn’t.

Labor Day is a great time to exercise your right to enjoy freedom from work. Celebrate with family and friends and wherever you spend the day, get home before dark. 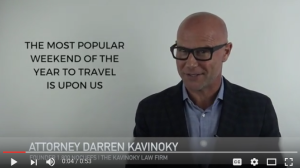 Chris Brown's "Past Could Return to Haunt Him"

By Darren Kavinoky in Motivation on September 2, 2016