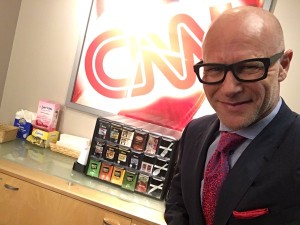 March 22, 2016–Los Angeles, CA–Hulk Hogan was awarded an additional $25 Million in punitive damages–on top of the $115 Million in compensatory damages the jury already awarded the former professional wrestler in the sex tape trial against media house Gawker. Darren Kavinoky appeared on CNN International to talk about the huge verdict win for Hulk Hogan.

Kavinoky commented on the case, “Clearly a strong message was sent. The pendulum has swung and I think what this says, combined with the Erin Andrews case recently, jurors are no longer willing to tolerate this kind of invasion of privacy, even in the case of celebrities where it’s long been determined that they have reduced expectations of privacy then Joe and Mary Citizen. But what this verdict says to me is that people are unwilling to tolerate the invasion into people’s bedroom doors.”

You can’t take cameras into the bedroom of a celebrity and turn it into journalism by virtue of their being a celebrity.

Click to tweet
Kavinoky added, “This really begs the question of what long lasting impact might this have in the world of First Amendment law. In that respect I think this is very limited. This is a Florida trial level court where the jury has reached a verdict. This is very different than an appellate court or a Supreme court–the U.S. Supreme Court–weighing in and settling a matter of law. I think what this will stand for is a very narrow proposition that you can’t take cameras into the bedroom of a celebrity and turn it into journalism by virtue of their being a celebrity.”

For more and to see what Darren Kavinoky says will happen next watch the video via CNN live here.

Okay, we may have had WAY too much fun on air @cnni @CNNnewsroom tonight! Love @IshaSesayCNN @vausecnn!! pic.twitter.com/19SUahFi4y

For more on the story, and to watch Darren Kavinoky live on air discussing the story with John Vause please visit CNN:

Spring is the Time to Act the Change; Produce Results