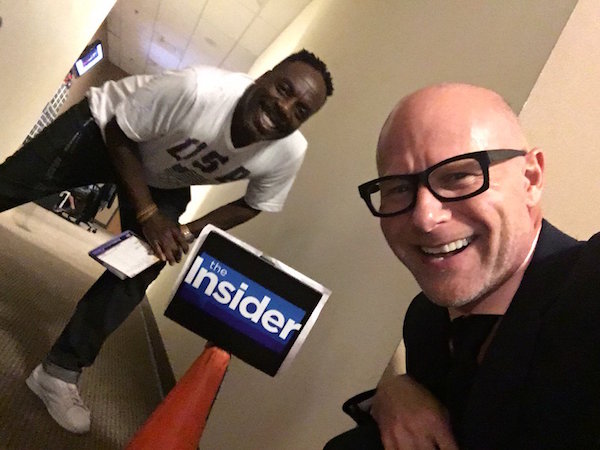 Darren Kavinoky behind the scenes on CBS The Insider, August 12, 2016

Mel Gibson sued Oksana Grigorieva to establish paternity; Oksana countersued, claiming damages due to domestic abuse. They reached a settlement where she admitted Mel was the dad, and Mel was to pay a total of $750,000 over five years.

The settlement agreement also contained a confidentiality clause, meaning Oksana was to keep secret “any and all information and facts related to the asserted claims and events underlying this Agreement.” (In other words, keep her mouth shut.) The settlement further specified that if this provision was breached, Oksana would forfeit all outstanding installments of the $750k.

After Mel paid the first $250,000, Oksana went on the Howard Stern show. Howard’s main talent in life is getting people to open up, and while Oksana made no explicit statement about her settled case with Mel, the court found that her statements, when taken in context with the interview as a whole, clearly implied Mel was an abuser, and relieved him of the obligation to pay the remaining $500,000.

Oksana appealed the court’s ruling, and now a panel of appellate court judges agreed with the trial court: Mel is officially off the hook! And, adding insult to injury, Oksana also has been ordered to pay Mel’s costs associated with his having to answer her appeal.

While it’s possible that Oksana could try to push her luck and take this to the California Supreme Court, it’s highly unlikely that they would hear it, and good generalship may dictate best to be grateful for the quarter million, learn a really important lesson that contracts mean what they say, and move on.

(Mel, your past indicates that you’ve got plenty to learn too, so I’m not letting you off the hook either, though I’m grateful that your DUI and anti-Semitic ranting got me my start in TV!)

“Given the proper interpretation of the confidentiality clause, the court’s breach of contract finding was plainly supported by substantial evidence. As recounted in the trial court’s order, when Stern referred to what O.G. had “been through with [M.G.],” O.G. responded by talking about the “experience that I went through,” which was “painful” and compelled her to “help others” by opening a “domestic violence charity.” The court found this exchange, taken in context with the “interview as a whole,” “clearly implie[d] that [O.G.] suffered domestic violence at the hands of [M.G.].” This was a reasonable inference to draw from the evidence. We find no error.” [M.G., v O.G., August 9, 2016, Los Angeles County Super. Ct. No. BF039488, IN THE COURT OF APPEAL OF THE STATE OF CALIFORNIA SECOND APPELLATE DISTRICT, DIVISION THREE].

Moments that Haunt Us: Dark Matter