The Rio Olympic Games are August 5-21, 2016. And the Paralympic Games will be held September 7-18, 2016. It will be the first time the Olympics are held in South America. Tune into here for personal stories, more trivia and links to videos we love during the games!

With the summer Olympics in Rio around the corner, we’ve got Olympic fever!

Question #3
Which country led the boycott of the 1980 Olympic Games in Moscow?
In 1980, The United States led the boycott of the summer Olympic Games in Moscow.
“A US-led boycott reduced the number of participating nations to 80, the lowest number since 1956, as part of a series of measures to protest against the December 1979 Soviet invasion of Afghanistan.” https://www.olympic.org/moscow-1980

The Paralympic Games will be held September 7-18, 2016. It will be the first time the Olympics are held in South America. Tune into DarrenKavinoky.com/Olympics for trivia and more videos as the games begin! 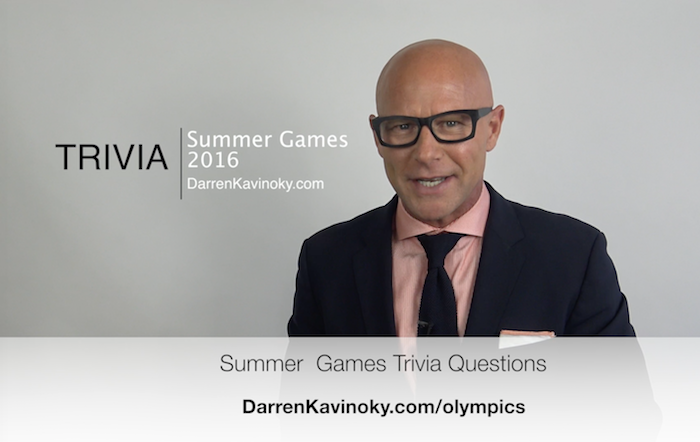 Be sure to also check out the Sinful Summer Playlist

See the full calendar of events at https://www.rio2016.com/en.

By Darren Kavinoky in Current Events & Legal News on August 10, 2016