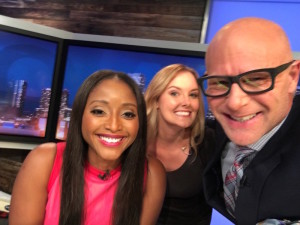 Megyn Kelly recently also shared stories with 21st Century Fox hired investigators that Ailes made unwanted advances towards her as well “about a decade ago,” (via a CNBC Report.) Roger Ailes has denied all charges by Carlson and recent allegations made by Kelly.

Darren Kavinoky joins CNN International to discuss the legal issues with Isha Sesay. “There’s a civil side where people are fighting about money, and a criminal side where somebody can face all kinds of criminal charges and time spent in jail.”

As for the rumored exit term agreement, and Isha Sesay’s question that if they are getting Roger Ailes out does that mean that he has done something wrong, Darren Kavinoky answers with a resolute, “No.” Kavinoky adds, “I would venture to guess…this term sheet that is sort of floating around would include certain provisions that would speak to exactly that.”

Kavinoky adds, “Under an agreement, it could be that the parties would agree that there would be no admission made by Ailes. And I would assume that such an agreement would be part of–or such a provision–would be part of any agreement. If I were counseling Ailes I would say, ‘You don’t want to be making admissions here that they can use against you in some other form.'”

Via the Los Angeles Times: “In a statement, Ms. Estrich, Mr. Ailes’s lawyer, said: ‘Roger Ailes has never sexually harassed Megyn Kelly. In fact, he has spent much of the last decade promoting and helping her to achieve the stardom she earned, for which she has repeatedly and publicly thanked him.’” [Retrieved via “Roger Ailes Is Negotiating His Departure as Chairman of Fox News” http://www.nytimes.com/2016/07/20/business/media/roger-ailes-fox-news-murdoch.html?_r=0]

By Darren Kavinoky in Behind The Scenes, Charity, Current Events & Legal News, Entertainment on July 20, 2016

Love Has No Labels #WeAreAmerica

By Darren Kavinoky in Behind The Scenes, Charity, Current Events & Legal News, Entertainment, Motivation on July 20, 2016