Day of Democracy: Will you Vote this Presidential Election?

Will more than 53% of Americans show up at the ballot booth for the 2016 Presidential Election? If voter turnout from 2012 is an indicator, then probably not.

About Day of Democracy

September 15th is the International Day of Democracy. It is a day to review the state of democracy around the world. It seeks to engage the international community in the global effort to both create and support goals that further the reach of democracy. It emphasizes the importance of free and secret voting rights for everyone.

According to the United Nations, “The values of freedom, respect for human rights and the principle of holding periodic and genuine elections by universal suffrage are essential elements of democracy. In turn, democracy provides the natural environment for the protection and effective realization of human rights.”

#DayofDemocracy: Will you Vote this Presidential Election? WATCH video & Take the POLL

According to the data from the Organization of Economic Cooperation and Development OECD, voter turnout in the United States in the past four years of elections has hovered around 60%. This means approximately forty percent of people who can vote in the United States do not cast a ballot.

Furthermore, PEW Research Center just released comparative data analysis showing that the United States trails other developed countries in voter turnout. Drew Desilver reports that “the U.S. lags most of its peers, landing 31st among the 35 countries in the Organization for Economic Cooperation and Development, most of whose members are highly developed, democratic states. U.S. turnout in the 2012 presidential election was 53.6%, based on 129.1 million votes cast and an estimated voting-age population of just under 241 million people.” (1)

Message from attorney Darren Kavinoky
I’m Darren Kavinoky. As an attorney, not a day passes that I don’t advise someone to remain silent. But on this Day of Democracy, I want to remind all of you to speak up and vote on November 8th, 2016. I’m asking each and every citizen to speak up on election day. Just like the right to remain silent only works if you choose to exercise it, democracy only works if we all choose to vote. That includes you! 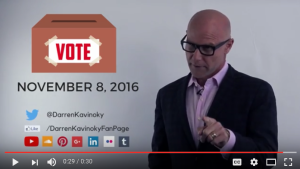 Darren Kavinoky urging everyone to vote on Election Day, November 8, 2016, a special message in celebration of Day of Democracy.

By Darren Kavinoky in Motivation on September 15, 2016