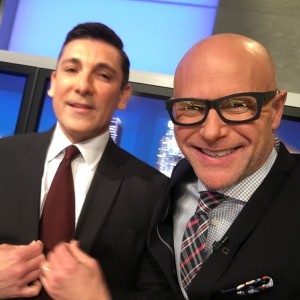 Tuesday, April 12, 2016–Los Angeles–Led Zeppelin’s “Stairway to Heaven” is an iconic rock song that defines a generation. Yet now, decades after the song’s release, the band has been ordered by a U.S. judge to face a jury in the copyright trial.

The suit is being brought by the Trustee of the Randy Wolfe Estate. Mr. Wolfe was a member of the rock band Spirit. The copyright infringement case against the 1971 release “Stairway To Heaven” song alleges that a riff is stolen from the 1968 Spirit song “Taurus.”

Attorney Darren Kavinoky joins John Vause and Isha Sesay on CNN International to give his legal opinion on where the case may be headed. (Watch CNN video below.)

“This is complicated difficult stuff to understand. This is going before your everyday run of the mill jury. Shouldn’t something like this actually go into a panel of music experts?” asks John Vause.

“Well, there is a movement to have professional jurors decide cases. This is an argument that has gone on for a long time. That generally speaking, when you put twelve people in a jury box, you never know what you’re going to get. And frankly that’s a compelling reason why cases will settle… Here all bets are off,” answers Kavinoky.

Isha Sesay, “I think it’s worth bringing out that Led Zeppelin has been sued before on two other occasions for let’s say making use of other people’s…” Kavinoky interjects, “Yes, for perhaps being more than inspired.” “Talk to me about whether that will play into this in any way,” Sesay asks.

“You’ve got to show that there was an opportunity and…intent.”

Click to tweet
“Well, it’s a very interesting legal issue. So here, whether or not they have done prior ‘bad acts’ may not necessarily be relevant for their conduct in this particular case. So you can expect that if this trial is indeed going forward that there will be violent argument between both sides about whether the judge would let that in or whether it’s what they say is more prejudicial than probative.”

“Often in these cases, isn’t it the case that you have to prove not just similarity but that the music or the material was heard in advance? And that brings in the question of access,” says Isha Sesy.

Kavinoky replies, “That’s exactly right that you’ve got to show that there was an opportunity and you have to show intent. And so here, this idea about substantial similarity is ultimately what the jurors are going to have to decide.”

“If you look at the length of time that this song ‘Stairway To Heaven’ has been around, it’s so iconic. It’s well woven into the fabric of American rock music and I think has garnered far more plays than ‘Blurred Lines’ ever did. So using that as just a benchmark, I would think you would expect an even higher jury award. But ultimately, and the wild card is, whatever jurors are going to want to do with it, this really becomes up to them,” comments Kavinoky.

For more on the story, and to see Darren Kavinoky live on air discussing the story with John Vause and Isha Sesay watch below:

By Darren Kavinoky in Entertainment on April 13, 2016