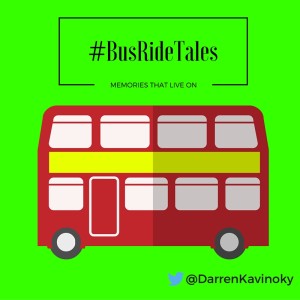 There is something about riding on buses that make for unforgettable experiences, like when a rock comes hurling through the glass windshield and almost takes out your friend.

My junior year I was riding home for the weekend from college on a five hour bus trip with a friend. We were sitting in the front of the bus in a row that had two seats. A couple of hours in, my friend got up from her seat to do something. Within a minute or so of her leaving her seat, broken glass was everywhere.

Out of nowhere, a rock came barrelling at the bus windshield with such force it shattered the glass and flew into the bus. The headrest of my friend’s seat (where her face had just been) was the barrier that dead stopped the rock in flight.

Had she been sitting there, I hate to even imagine how the force of that rock would have harmed her. She was so incredibly lucky that she had the inclination to get up for that one minute–in that instant–from her seat. And I was equally as lucky that the trajectory of the rock hit her empty seat and not my face.

We were stunned. The incident happened in a flash but it is a memory and a “bus ride tale” that I will never forget. It remains today a “timing is everything” lesson and reinforces my belief in guardian angels.

Last week, Darren Kavinoky asked his Twitter followers if they had #BusRideTales to share. Darren’s “Tweeps” have some great stories! Here are are a few of them:

@DarrenKavinoky Party bus in the 90's to see Pink Floyd in Nashville, lots of fun but a "busy" bathroom. Mile high club on wheels

Funniest: In Lesvos, Greek island. Driver let a woman on free of charge, but charged her for the chicken she was carrying.

@DarrenKavinoky two years in a row on a white water rafting trip the bus lost a wheel on a mountain road next to a sheer drop to death.

@DarrenKavinoky I DROVE a bus in college. After a stop forTaco Bell on a swim trip, food poisoning hit me with 3 hours to go. #BusRideTales

@DarrenKavinoky Bus ride to casino and the only two seats that were left, were next to the restroom. I never want to smell another soul!😭

@DarrenKavinoky Boston to Portland, they overfilled. Had a guy standing next to me with his butt in my face for 2 hours! #busridestories

@DarrenKavinoky A spirited 😈 teenager, I was sent off to the country to live w/my grandfather. Coincidentally I sat next to a priest on bus.

@DarrenKavinoky Head on collision with a drunk driver. He ended up decapitated.

@DarrenKavinoky my driver couldn't figure out how to work the new bus's CD player. Listened to sweet home Alabama on repeat all the way home

@DarrenKavinoky 7th grade on the school bus, got mooned by some guys from another school. Good times. https://t.co/Ka844pNn6s

June Book Selection: The Girl on the Train

First signs of Rachel's alcoholism in The Girl on the Train