Constitution Day is September 16, 2016. We put attorney Darren Kavinoky on the hot seat to see if he could pass the American Citizen test. Darren was born here, but we wanted to see if he has what it takes to become a naturalized citizen. He seems to know his “stuff” but we are left with one burning question… Did he say BBQ Peaches? Watch. 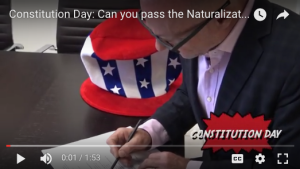 #ConstitutionDay test your knowledge with @DarrenKavinoky

By Darren Kavinoky in Motivation on September 16, 2016

By Darren Kavinoky in Current Events & Legal News on September 16, 2016