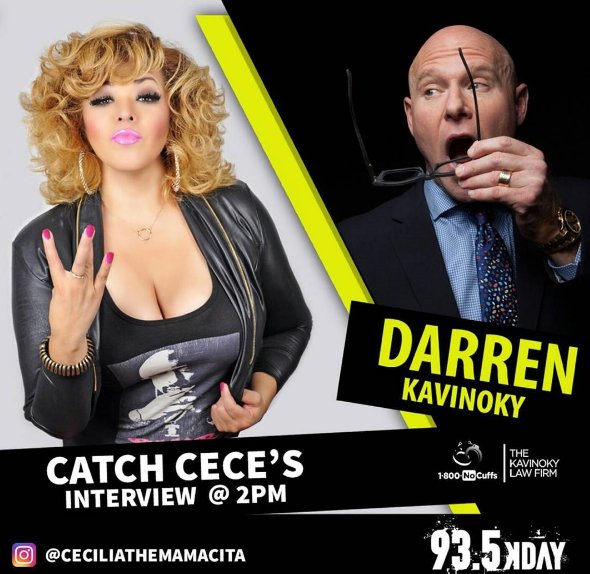 November 8, 2016–Los Angeles, California–Attorney Darren Kavinoky appears on 93.5 FM KDAY with Cecilia The Mamacita in Los Angeles to give his legal advice on DUI and talk about his show “Deadly Sins” on Investigation Discovery. “You better sleep with one eye open,” Darren says is a line he often says when fans of the show approach him and make jokes about not wanting to ever be on the show.

Cecilia The Mamacita opens the show by saying, “People have seen you on The View, Dr. Phil, Fox News, Entertainment Tonight, Dr. Drew, …you’re very popular and a lot of people love you. But you’re here today and we’re here talking about 1.800.NoCuffs.”

“No one looks good in handcuffs… unless you’re into that sort of thing,” jokes Darren. “I’m just curious,” asks Cecilia The Mamacita, “even though I don’t drink, I’m still curious to find out, do you get more calls during the holidays or during the summertime?”

Darren answers, “The biggest holiday of the year for DUI arrest.. you want to guess?”

“That’s right!” Darren says. “That is the number one time for DUI arrests. And I would say this, I encourage people, please please please, hear me when I say, be responsible. Don’t drink and drive.”

“Let me tell you what I love about 1.800.NoCuffs,” says Cecilia The Mamacita, “it’s that you guys make people comfortable to call you. You don’t judge them at all.”

Darren gave Cecilia The Mamacita a DUI quiz which you can take here.

By Darren Kavinoky in Entertainment on November 10, 2016

By Darren Kavinoky in Current Events & Legal News on November 10, 2016