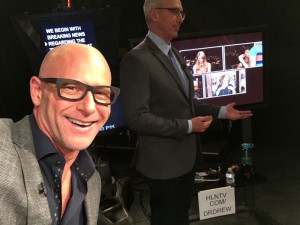 June 29, 2016–Los Angeles, California–Darren Kavinoky joins Dr. Drew on HLN to discuss the “Texas Mom Murder Case” with Dr. Drew Pinsky and how it highlights mental health issues. 911 calls released by the police in the recent murder case that involves a mother shooting her two daughters indicate the daughters pleaded for her not to shoot them. Dr. Drew HLN plays back the calls wherein you can hear what is being reported as the 17 year old daughter Madison crying, “Don’t Shoot. Please! I’m sorry! Don’t.” The older daughter Taylor, 22, also reportedly calls 911 and you can hear her saying, “It’s not okay…”

The two sisters were murdered at a family meeting the Dr. Drew show reports. It is reported that the mother, Christie, shot her two daughters then chased one of them out the front door. A witness who called 911 says, “She’s going inside the house now. Hopefully it’s not getting any more bullets. Because it looks like she’s going to look for more bullets. …Oh, she shot her again, she shot her again.”

Jason, the husband of Christie the mother and father of the two murdered girls, according to Lisa Guerrero, Correspondent, Inside Edition, says Christie called the family together to have a family meeting. Reports Guerrero, “He thought that she called the family meeting to announce that there was going to be a divorce. That’s what he told the cops thought she was going to say to the girls. And apparently she wanted to hurt him. He also said that the 38 caliber was given to her by her deceased grandfather. She applied for a permit and was denied. …The cops had been called to that home over a dozen previous times.”

The Fort Bend County sheriff, in a press conference, says, “Christie was admitted to a private mental health facility for evaluation and treatment on three separate occasions related to attempted suicide. …The length of time in these hospitals were a few days and he picked Christie up once she was released. …Christie was suffering from depression and taking numerous prescription medications. He also told us that Christie was seeing a therapist.”

Dr. Drew also plays the 911 call wherein you can hear Jason the father and husband in the background saying, “I promise you Whatever you want, I will-”

“This is hard to talk about,” says Dr. Drew. “The police officer or the Sheriff I guess was saying that this is depression. This is is much more than depression. This is somebody with an unstable personality. This is probably again–for viewers that don’t understand these things–more in the sort of Jody Arias character problems.”

Of the short couple of day holds in the mental health facility, Dr. Drew argues that insurance companies are usually to blame for not allowing patients to get the longer extended stay help they need.

Darren Kavinoky says, “I think ultimately what we’re dealing with here is the stigmatization of mental health issues in our country.”

“Absolutely,” answers Darren Kavinoky. “If this was somebody who suffered from Cancer or Lupus family rallies around to make sure that all of their needs are attended to. When we have these mental health issues, in for a short hold and out, people don’t want to talk about it.”

“But Darren,” says Dr. Drew, “that’s the point, is that nobody advocates, so the insurance companies have to do what the physicians and therapists tell them to do. …What they say is, ‘what good is a hospital, she’s not suicidal anymore. She doesn’t meet criteria for a hold. She’s not acutely unstable. Why keep her?’ I’ve dealt with that hundreds, maybe thousands of times. And I”m telling you more often then not, it was to the detriment of the patient and the family.”

“It’s horror beyond belief,” says Darren Kavinoky. “And when you add to it the 911 calls that really bring it home in real time it’s just so tough to listen to.”

By Darren Kavinoky in Behind The Scenes, Crime, Current Events & Legal News, Entertainment on June 30, 2016

3 Thumbs Up for The Girl on the Train